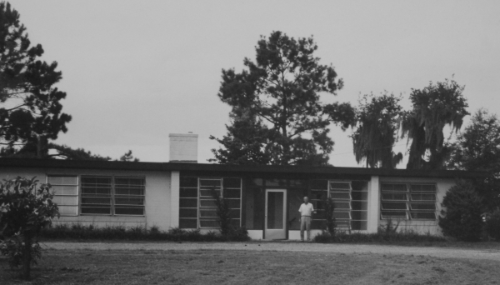 The North Florida Research & Education Center - Suwannee Valley (NFREC-SV) is an off-campus facility of the University of Florida's Institute of Food and Agricultural Sciences (IFAS). The Center dates back to 1947 when legislation was passed enabling the creation of the Suwannee Valley Experiment Station. In 1950 work was begun with the transfer of George E. Ritchey from the University of Florida's Main Station to Live Oak and the hiring of secretary, Ms. Bernice Allen. The first buildings to be constructed were the main office building and an equipment shed.

Early experimental work focusing on pastures and corn fertilizer studies was conducted on the land of several local farmers. In 1953 a 300-acre tract, which included a 30-acre lake useful for irrigation, was purchased from Huelin Lee. The land was previously owned by the Dexter family and it used to be a slave farm where gladiolus bulbs were grown. In 1965, 20 additional adjacent acres were purchased from H.E. Wiggins, Sr. and in 1966 the Swine Research Facility was established at the Suwannee Valley Experiment Station at the request of the Suwannee County Rural Areas Development Council. In 1980 this program was enhanced with the movement of the Florida Swine Evaluation Unit (formerly west of Live Oak) to the Center in August 1980. The Swine Evaluation Program was discontinued in 1992 and all swine research and evaluation facilities demolished in 1998. From 1976 to 1992 an onsite nematology program led by Dr. J.R. Rich took place at the center before the entire program was transferred to North Florida Research and Education Center- Quincy in 1992. A Farming Systems Research and Extension program designed to generate, test, and deliver appropriate technology for small farms in northern Florida was initiated in 1981. Dr. Marilyn Swisher, was housed at the Center as the first Multi-County Small Farms Agent in 1982. This program grew by adding a second Multi-County Marketing Agent in the mid-1980s. The two Multi-County positions began to serve the region, one with a focus on vegetable crop production and one on agribusiness and marketing in 1987. Two additional regional positions were added in 2015 (Agronomic Crops) and 2016 (Water Resources). As of 2016, all four positions were classified as Regional Specialized Extension Agents.

During the late 1980s, efforts at the Center had begun to shift into alternative crops for agronomic farmers, much of the new work was with horticultural enterprises, such as vegetables and fruit crops. Faculty members from the main UF campus doing major research at the time were Dr. George Hochmuth, Dr. Ed Hanlon and Dr. Bill Stall. Research and demonstrations carried out included new vegetable crops, plastic mulch, drip irrigation, fertilization, economics, pest control and post-harvest technologies.

Hydroponic vegetable production was also started during this period when the first greenhouse was added in 1989. In the early 1990s horticultural programs were expanded at the Center and the name of the Center was changed from Agricultural Research and Education Center-Live Oak to the Suwannee Valley Research and Education Center. Field days have always been very popular and grant-funded research projects have continuously increased over time. In July 2000, the Center was merged administratively with the NFREC-Quincy and was renamed NFREC-SV. Programs with new crops and production systems continued and an increase in water and nutrient management projects occurred after 2000. In 2012, the Center again transitioned by being separated from NFREC to stand alone administratively as an Extension unit and renamed Suwannee Valley Agricultural Extension Center.

In 2018 a decision was made to merge the Suwannee Valley Agricultural Extension Center under NFREC and it was renamed NFREC-SV once again.